Came across an interesting review today - "9 great keyboards for coders". Grab one of the boards mentioned, and you'll get a 5% discount until next week (1st August) for Filco and Matias 'boards. Excerpts below: 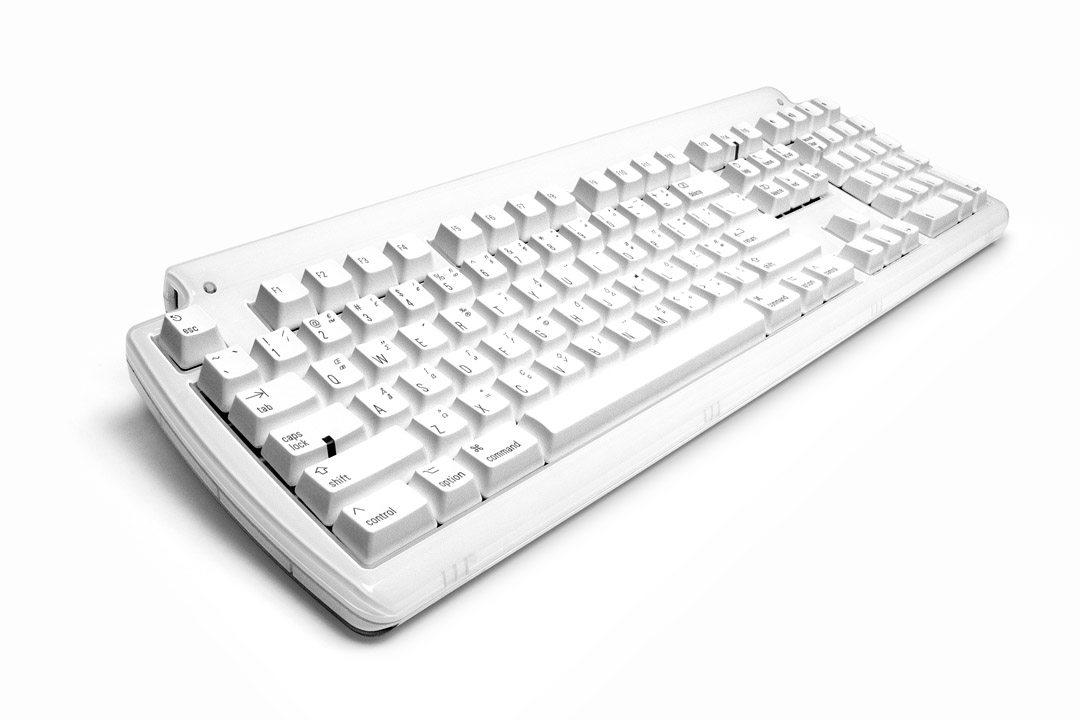 "The Tactile Pro4 is Matias' answer to the Model M. It has an industrial look and feel, but it's easier on the eye than the Unicomp—rather like its prettier sister.The keys are substantially clicky and responsive. Matias forgoes the popular Cherry MX keys for its own take on Alps, the Japanese keys used in the famed Apple Extended Keyboard. The keys have the same crispness when typing as on the Unicomp, but the sound is more tenor than the Unicomp's full bass.

The Tactile Pro returns the upstroke quickly. My fingers flew over the keys, even though they wobble oh-so-slightly. (The keys. Not my fingers. Usually.)

This is a full-sized keyboard, which means it includes a numpad, arrow keys, and a nav cluster. (Matias also makes a version without a number pad, the Mini Tactile Pro, and a quiet version, theQuiet Pro.) The Mac keyboard gives you a whopping 18 function keys; the PC version has slight differences, such as swapping a function key for a "Print Screen" key.

At first glance, the lettering looks like arcane glyphs carved by elder gods. I find that sort of thing appealing. The Mac version’s letter keys are festooned with extra characters, which you can access with either the Option key or Option+Shift. So, for example, if I need to type the copyright symbol, I can just look down. Technically any keyboard can do this, but the Tactile Pro puts a reference on the keycaps themselves. If you need to type uncommon symbols frequently, that alone might be reason to consider this board; it's the only one in this roundup with this feature.

The Tactile Pro also contains a useful three-port USB 2 hub. Its feet, when extended, don’t grip my table, but the keyboard remains in place, no matter how hard I bang away.

The plastic of the keyboard is shiny. It does not look cheap per se, but it's not especially alluring. I prefer the matte of the Ergo Pro (see below).

Mac classicists. With its extra glyphs and symbols, it’s a great keyboard for international users…or those who want to summon demons." 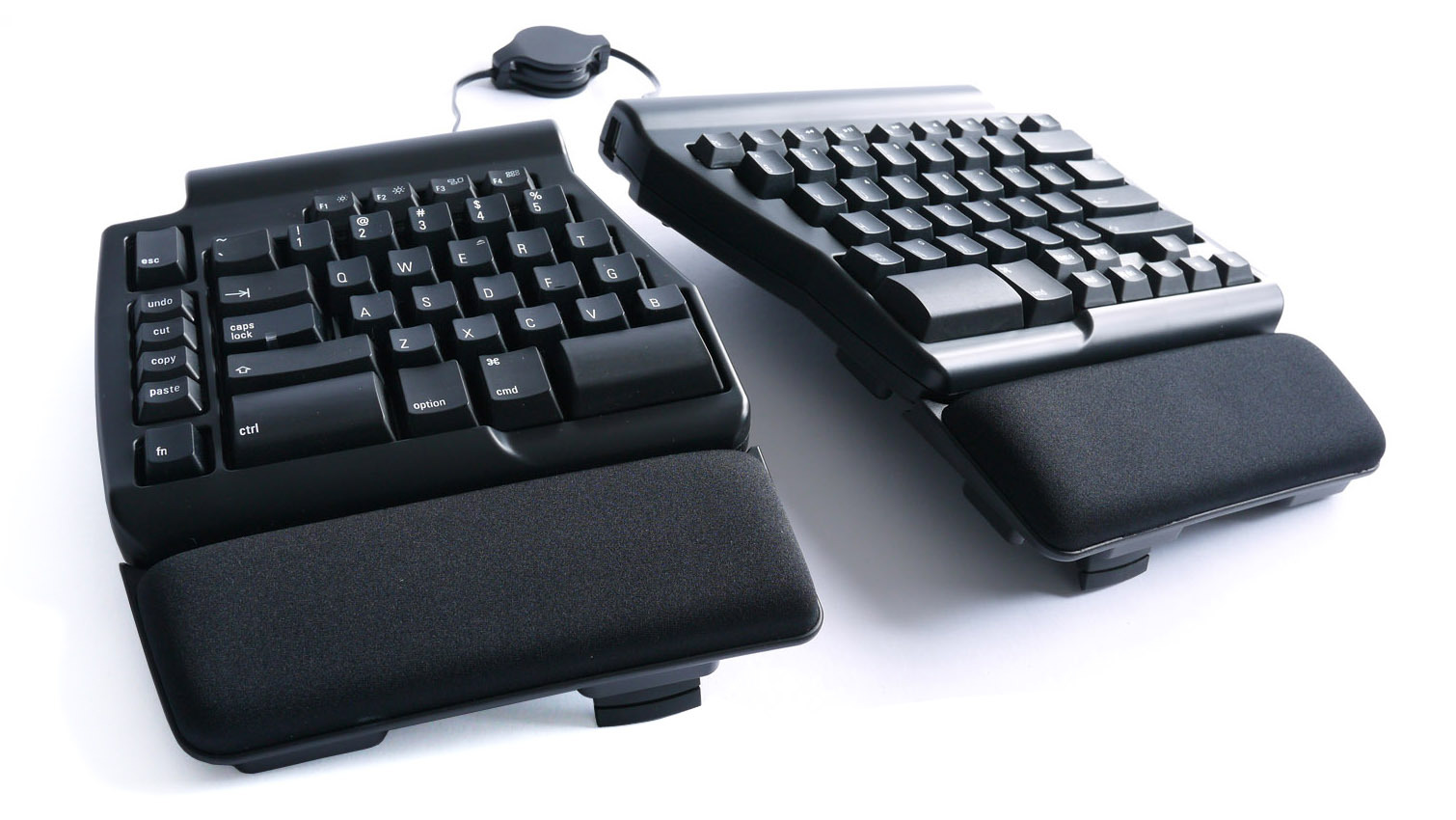 The Matias Ergo Pro is an ergonomic split keyboard that, despite its plastic construction, has a premium feel due to quality touches such as rounded edges and plush, removable gel pads.

The two halves of the Ergo Pro can be pushed together for a relatively compact keyboard layout, or moved apart, allowing your arms to orient directly forward. The legs—three on each side—can be angled either forward for tilting or sideways for tenting. Both orientations are solid, thanks to the slightly curved and rubberized feet. But if you want to remove the gel pads, you’ll take the front legs with them.

The Ergo Pro’s bottom row has fat extra-tall keys and a split spacebar (one on each side). The arrow keys are squeezed in as half-height ones, the same strategy taken by smaller laptops. It also has a mini nav cluster wedged in next to it, which I found a bit awkward for typing PgUp or PgDown.

Awesomely, the Ergo Pro features a left-hand side column of keys for Undo, Cut, Copy, and Paste—useful for writers and programmers alike. An extra Control key is nestled next to N, and rather quixotically, there's also a ye olde forward-delete key at top right, next to F12.

The brains of the Ergo Pro are in the right half of the keyboard, which you connect to your computer with a Micro USB connector (in two lengths). The left side attaches to the right via a TTRS cable (you may know this phono connector from the stereo headphone+mic jack evicted from the iPhone 7). There are two of these too, an almost too-short 8-inch one and a longer 24-inch cable with a retracting spinnaker that is still on the short side—but at least you can swap in your own if you need longer.

The keyboard includes a USB 2 hub with three standard-size ports, all of which work to plug in mice, trackballs, or USB sticks.

Not mentioned anywhere are four DIP switches hidden under the AltGr (or right Cmd, on the Mac version) key. Flipping the DIP switches changes the keyboard's configuration, including a swap between Mac and PC.

The keys in the Ergo Pro are Matias' own tactile Quiet Click variant on the Alps keys, so no swapping in your favorite Cherry-compatible keycaps here. Despite the name, the keys don’t make an audible click; they’re even quieter than a Cherry MX Red Silent (as found on the Corsair Strafe), albeit not as smooth.

But the Ergo Pro did something that no other keyboard here did: While the keyboard was in tent position, my hands rested on them gently. Looking down as I typed away, it seemed like my arms were hovering over the desk. I wasn’t just typing. I was a maestro, conducting a grand symphony of keystrokes.

People who want a reasonably standard ergonomic keyboard with solid quality. People who conduct orchestras in their minds.

The Filco Majestouch-2 tenkeyless (TKL) ($150) is a straight-up keyboard that does not allow for customization, which could make it less attractive to hackers. Don't let that limitation get in your way. This is one excellent keyboard.

All TKL essentials are covered: function and arrow keys, plus a nav cluster, 87 keys of (in this case, Cherry MX Clear) goodness. But what makes it special is the build. The Majestouch-2 has a terrific, solid feel. At 2.2 pounds, the plastic construction makes it considerably lighter than you’d expect for a keyboard this substantial. Its legs are sturdy too, and the rubber pads gripped onto my table like a champ.

Yet my fingers felt light on the keys. Typing with this keyboard was a pleasure, with one exception: I'm a Mac girl, but this model was a PC. The Windows button—which substitutes as a Mac command key—is sandwiched between the Control and Alt buttons, and I don't care for that positioning. Luckily, the keyboard remapper Karabiner can remedy that, but there's no on-board way to do it.

So what sets this apart from other mechanical keyboards? First, that solidity. Second, its color choices. Although many mechanical keyboards give you binary options of black or white, Filco’s keyboards come in multiple colors or even a camo print in case you want your office to blend into a jungle background.

And last, the italic Futura font Filco uses is a cut above the bland fonts from other keyboard manufacturers.

If you want a numpad, you can buy a full-size version of the Majestouch-2, or get an optional separate numpad to place, say, to the right of your mouse.For those who prefer a sleek, black look, Filco makes the awesomely named Ninja, a light-absorbing keyboard with its lettering printed on its sides.

People who won’t sacrifice style for comfort or comfort for style. People who like to wear camo and kill silently with poison darts.